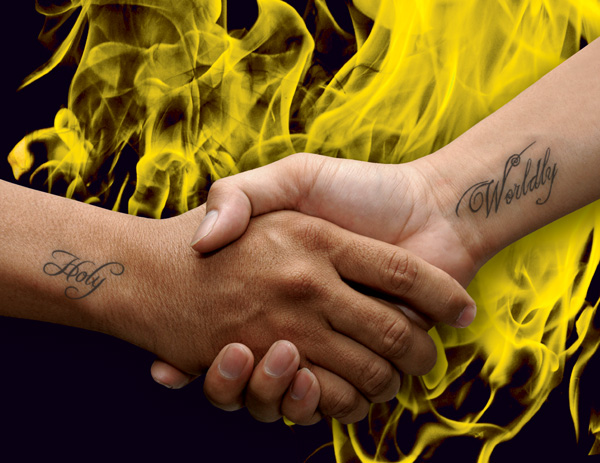 God has called His church in this day, as He called ancient Israel, to stand as a light in the earth. By the mighty cleaver of truth, the messages of the first, second, and third angels, He has separated them from the churches and from the world to bring them into a sacred nearness to Himself. He has made them the depositaries of His law and has committed to them the great truths of prophecy for this time. Like the holy oracles committed to ancient Israel, these are a sacred trust to be communicated to the world. The three angels of Revelation 14 represent the people who accept the light of God’s messages and go forth as His agents to sound the warning throughout the length and breadth of the earth. Christ declares to His followers: “Ye are the light of the world.” To every soul that accepts Jesus the cross of Calvary speaks: “Behold the worth of the soul: ‘Go ye into all the world, and preach the gospel to every creature.'” Nothing is to be permitted to hinder this work. It is the all-important work for time; it is to be far-reaching as eternity. The love that Jesus manifested for the souls of men in the sacrifice which He made for their redemption, will actuate all His followers. {5T 455.2}

But very few of those who have received the light are doing the work entrusted to their hands. There are a few men of unswerving fidelity who do not study ease, convenience, or life itself, who push their way wherever they can find an opening to press the light of truth and vindicate the holy law of God. But the sins that control the world have come into the churches, and into the hearts of those who claim to be God’s peculiar people. Many who have received the light exert an influence to quiet the fears of worldlings and formal professors. There are lovers of the world even among those who profess to be waiting for the Lord. There is ambition for riches and honor. Christ describes this class when He declares that the day of God is to come as a snare upon all that dwell upon the earth. This world is their home. They make it their business to secure earthly treasures. They erect costly dwellings and furnish them with every good thing; they find pleasure in dress and the indulgence of appetite. The things of the world are their idols. These interpose between the soul and Christ, and the solemn and awful realities that are crowding upon us are but dimly seen and faintly realized. The same disobedience and failure which were seen in the Jewish church have characterized in a greater degree the people who have had this great light from heaven in the last messages of warning. Shall we, like them, squander our opportunities and privileges until God shall permit oppression and persecution to come upon us? Will the work which might be performed in peace and comparative prosperity be left undone until it must be performed in days of darkness, under the pressure of trial and persecution? {5T 456.1}

That night I dreamed that I was in Battle Creek looking out from the side glass at the door and saw a company marching up to the house, two and two. They looked stern and determined. I knew them well and turned to open the parlor door to receive them, but thought I would look again. The scene was changed. The company now presented the appearance of a Catholic procession. One bore in his hand a cross, another a reed. And as they approached, the one carrying a reed made a circle around the house, saying three times: “This house is proscribed. The goods must be confiscated. They have spoken against our holy order.” Terror seized me, and I ran through the house, out of the north door, and found myself in the midst of a company, some of whom I knew, but I dared not speak a word to them for fear of being betrayed. I tried to seek a retired spot where I might weep and pray without meeting eager, inquisitive eyes wherever I turned. I repeated frequently: “If I could only understand this! If they will tell me what I have said or what I have done!” {1T 577.2}

I wept and prayed much as I saw our goods confiscated. I tried to read sympathy or pity for me in the looks of those around me, and marked the countenances of several whom I thought would speak to me and comfort me if they did not fear that they would be observed by others. I made one attempt to escape from the crowd, but seeing that I was watched, I concealed my intentions. I commenced weeping aloud, and saying: “If they would only tell me what I have done or what I have said!” My husband, who was sleeping in a bed in the same room, heard me weeping aloud and awoke me. My pillow was wet with tears, and a sad depression of spirits was upon me.

The enemy of souls has sought to bring in the supposition that a great reformation was to take place among Seventh-day Adventists, and that this reformation would consist in giving up the doctrines which stand as the pillars of our faith, and engaging in a process of reorganization. Were this reformation to take place, what would result? The principles of truth that God in His wisdom has given to the remnant church, would be discarded. Our religion would be changed. The fundamental principles that have sustained the work for the last fifty years would be accounted as error. A new organization would be established. Books of a new order would be written. A system of intellectual philosophy would be introduced. The founders of this system would go into the cities, and do a wonderful work. The Sabbath of course, would be lightly regarded, as also the God who created it. Nothing would be allowed to stand in the way of the new movement. The leaders would teach that virtue is better than vice, but God being removed, they would place their dependence on human power, which, without God, is worthless. Their foundation would be built on the sand, and storm and tempest would sweep away the structure. {1SM 204.2}

The voice from Battle Creek, which has been regarded as authority in counseling how the work should be done, is no longer the voice of God.–17MR 185 (1896). {Last Day Events 50.2}

I saw that God has honest children among the nominal Adventists and the fallen churches, and before the plagues shall be poured out, ministers and people will be called out from these churches and will gladly receive the truth. Satan knows this; and before the loud cry of the third angel is given, he raises an excitement in these religious bodies, that those who have rejected the truth may think that God is with them. He hopes to deceive the honest and lead them to think that God is still working for the churches. But the light will shine, and all who are honest will leave the fallen churches, and take their stand with the remnant. {EW 261.1}

All that will live godly in Christ Jesus shall suffer persecution.” 2 Timothy 3:12. As the defenders of truth refuse to honor the Sunday-sabbath, some of them will be thrust into prison, some will be exiled, some will be treated as slaves. To human wisdom all this now seems impossible; but as the restraining Spirit of God shall be withdrawn from men, and they shall be under the control of Satan, who hates the divine precepts, there will be strange developments. The heart can be very cruel when God’s fear and love are removed. {GC 608.1}

As the storm approaches, a large class who have professed faith in the third angel’s message, but have not been sanctified through obedience to the truth, abandon their position and join the ranks of the opposition. By uniting with the world and partaking of its spirit, they have come to view matters in nearly the same light; and when the test is brought, they are prepared to choose the easy, popular side. Men of talent and pleasing address, who once rejoiced in the truth, employ their powers to deceive and mislead souls. They become the most bitter enemies of their former brethren. When Sabbathkeepers are brought before the courts to answer for their faith, these apostates are the most efficient agents of Satan to misrepresent and accuse them, and by false reports and insinuations to stir up the rulers against them. {GC 608.2}