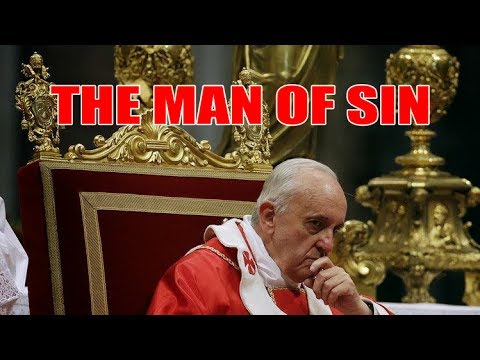 POPE FRANCIS: THE MAN OF SIN

Ecumenism and Apostate protestantism are on the move and christians are asleep. We are in a religious liberty crisis and Ted Wilson says that the mark of the beast is any day. Can Wilson be trusted? Donald Trump visited the Vatican May 24th, 2017. Will he follow the Pope’s plan in his last encyclical (Laudato Si) to end global warming and climate change?

Thus the message of the third angel will be proclaimed. As the time comes for it to be given with greatest power, the Lord will work through humble instruments, leading the minds of those who consecrate themselves to His service. The laborers will be qualified rather by the unction of His Spirit than by the training of literary institutions. Men of faith and prayer will be constrained to go forth with holy zeal, declaring the words which God gives them. The sins of Babylon will be laid open. The fearful results of enforcing the observances of the church by civil authority, the inroads of spiritualism, the stealthy but rapid progress of the papal power–all will be unmasked. By these solemn warnings the people will be stirred. Thousands upon thousands will listen who have never heard words like these. GC 606

In the very time in which we live the Lord has called His people and has given them a message to bear. He has called them to expose the wickedness of the man of sin who has made the Sunday law a distinctive power, who has thought to change times and laws, and to oppress the people of God who stand firmly to honor Him by keeping the only true Sabbath, the Sabbath of creation, as holy unto the Lord.–Testimonies to Ministers, p. 118. (1903) {Ev 233.2}

We are living in a momentous period in this earth’s history. The great conflict is just before us. . . . The man of sin has worked with a marvelous perseverance to exalt a spurious sabbath, and the disloyal Protestant world has wondered after the beast and has called obedience to the Sabbath instituted by Jehovah disloyalty to the laws of the nations. Kingdoms have confederated to sustain a false sabbath institution, which has not a word of authority in the oracles of God. . . . {CTr 328.4}

The death of Protestantism is scheduled for October 31st, 2017. Will you protest the sins of Babylon or will you work with the Papacy by remaining silent to her sins? Is the papacy the antichrist? Are the jesuits infiltrating all the denominations? Is it bashing the pope to call him the man of sin? Martin Luther (Lutheran), John Calvin (Presbyterian), John Wesley (Methodist), and Roger Williams (Baptist) all exposed the PAPACY as the man of sin. Why are the pulpits of the land silent as to who the antichrist is? Pope federalize EU. Pope wants people to Keep Sunday Holy. Is Sunday a mark of her authoruty? Mass and the Eucharist are practiced by many christians. Is it biblical to pursue such a course? Are Pope Francis and Kenneth Copeland forming a one world religion? The man of sin must be revealed before Jesus comes. Francis addressed joint session of congress in 2015 in America. This would have never happened under the presidency of John F. Kennedy or Abraham Lincoln.